Skip to content
DEFENSE will release on Friday, January 27, 2017 and is up for pre-order on Amazon. Links are listed below. I will post the links to iBooks, Kobo and B&N as soon as they become available.
Amazon US: http://amzn.to/2jmEeoA
Amazon UK: http://amzn.to/2jGck8a
Amazon AU: http://amzn.to/2jO4Thc
BLURB:
Ariana
Betrayal. The pain and rage that consumed me was unbearable. My perfect reality had become my hurtful one. Loss of illusion settled inside me and constricted the air I breathed. I felt as if my entire life was a lie. Fresh out of law school, I needed a new start and to put the pieces of my life back together. When I left Boston and moved to New York, I met Luca Russo, a high powered, sexy attorney who liked control. He took me under his wing and did things for me no other man had ever done. Everything comes with a price, and mine was falling for a man who couldn’t return my affection. Then one night tragedy struck and he needed my help. That was the night I became his defense.
Luca
There wasn’t anyone or anything I couldn’t control. I thrived on it. It made me who I was. Some called me ruthless because I played dirty in the courtroom, and some called me a man-whore because I liked to sleep with women but refused to give them anything more. I was a thirty-year-old man with the world at his fingertips. I had a successful career that I loved, a luxury apartment on Park Avenue, and the company of any beautiful woman I wanted at any time. Then Ariana Williams walked into my firm and left me breathless. The chemistry between us was undeniable. But I had a past and a secret I never wanted her to know, so I had to walk away. Then one tragic night I needed her, and now she holds the fate of my life in her hands. 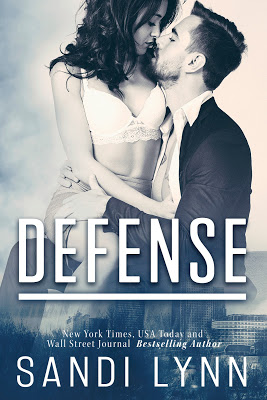